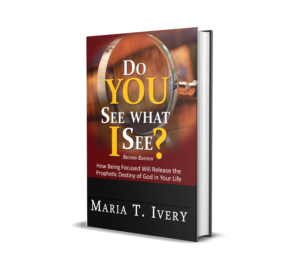 Prophetess Ivery has been teaching and preaching the Gospel over two decades. She has ministered in the missionary fields of Puerto Rico, Haiti, Bermuda, and received outreach missionary training in Jerusalem, Ghana and Zambia where she appeared on TBN Zambia.

Prophetess Ivery was ordained as a Missionary and Minister in 1993. In 1997, she was ordained as an Elder at the Rock Church Family Worship Center under the leadership of Pastors Bryant-Lee and the late Charlene Phillips where she served as an Executive Board member and Minister Director of the new Member’s Training classes.

In 1999, Prophetess Ivery completed her specialized training in the Prophetic, which involved the “Five-fold” Ministry Gifts, specifically in the Office of Prophet from the Eagle’s Nest Prophetic College where she later served as an Instructor and Board Member of the International Apostolic Prophetic Network (I.A.P.N.) founded by Apostle Ricci J. Hausley. She also earned accredited ministry training from the Mount Airy Religious Training Institute (M.A.R.T.A. Philadelphia, PA 1992), the Jameson School of Ministry (Philadelphia, PA, 1994) and the Victory Christian Center’s School of the Word, (Philadelphia, PA, 1994).

Presently she is a leader at Word of Restoration International Church under the leadership of Pastor Charles Perry Jr and Lady Charlotte Perry and actively apart of the Intercessory, Ministry of Helps and Triumph Woman of God.

Prophetess Ivery is a certified life coach and also a registered nurse who graduated from Albert Einstein School of Nursing in 1983. She is currently working at Texas Children’s Hospital Pavilion for Women. Her spiritual gifting has also offered the opportunity to have served as a chaplain to psychiatric patients at Temple University Hospital in Philadelphia, Pennsylvania.

She’s the founder of Focus on Jesus International Ministry, training and activating many in the prophetic as well as a midwife assisting those in birthing out there vision.

For ministry contact or speaking engagement requests, please email us at fojesusmin@aol.com.